Adaptive Biotechnologies has raised the price for its initial public offering, putting itself in a position to raise more cash than any other biotech IPO this year. 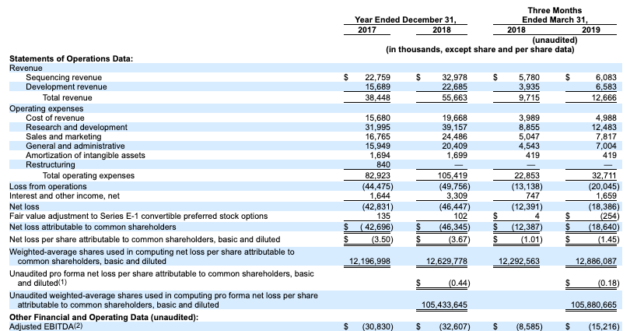 The Seattle-based company, which makes technology that can read the genetic information of the human immune system, increased its target price to $18 to $19 per share and could raise as much as $327.5 million from investors, according to a new SEC filing.

That haul would value Adaptive at more than $2 billion when the company debuts on the tech-heavy NASDAQ exchange under the ticker ADPT on Thursday.

Gossamer Bio currently holds the crown for the largest biotech IPO of 2019 with $276 million raised in February.

Near the end of last year, Moderna Therapeutics set an industry record with a $604 million IPO.

Update, June 27: Adaptive raised $300 million in its IPO, pricing its stock at $20 per share Wednesday evening.

It will end up being the second-largest biotech IPO of 2019 as BridgeBio Pharma also went public on Wednesday and raised nearly $350 million.

The overall IPO market this year is down compared to 2018, with 507 public offerings racking up $72 billion — a decline of 28 percent from this time last year, according to a recent report from EY.

Technology companies have led the way with 68 IPOs, followed by healthcare companies with 56 public offerings.

Adaptive initially sought $230 million in the public offering, adding to the $400 million it has raised from private investors since it was founded in 2009.

It is the first Seattle-area company to go public this year. Adaptive upped its target to $244 million earlier this month.

Inside the Adaptive Biotech IPO: How two brothers built a big idea into a breakthrough company

Robins stepped down from his role as head of the computational biology program at Fred Hutch earlier this month.

Harlan started the company with his brother Chad Robins, and together they built an immunosequencing platform that promises to deliver new ways of diagnosing and treating diseases.

The company has collaborated with Microsoft to launch an AI engine that can detect several diseases from a single blood test.

Microsoft invested $45 million in Adaptive and the startup agreed to spend $12 million on Microsoft Azure services as part of that deal. Microsoft said recently that the project could start diagnosing diseases “within a small number of years.”

Adaptive also has a $300 million collaborative licensing agreement with Genentech to develop personalized cancer therapies. In addition to the up-front payment, Adaptive could receive up to $1.8 billion if certain milestones are met, as well as royalties on potential sales.

In public documents, the company said its total addressable market is $48.7 billion, with cell therapies for cancer treatment accounting for approximately two-thirds of that opportunity.