Not to be confused with Babcock International.

Babcock & Wilcox Enterprises Inc. (NYSE: BW), originally Babcock, Wilcox & Company and then The Babcock & Wilcox Company, is a global leader in advanced energy and environmental technologies and services for the power, renewable and industrial markets.

B&W is headquartered in Akron, Ohio. 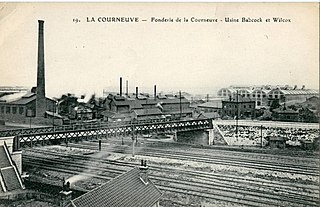 Historically, the company is best known for their steam boilers and later as a provider of emissions control equipment, waste-to-energy facilities and aftermarket parts and services for a host of industries.

B&W's boilers supply more than 300,000 megawatts of installed capacity in over 90 countries around the world. During World War II, over half of the US Navy fleet was powered by Babcock & Wilcox boilers.

The company has its headquarters in Akron, Ohio. It has major operations in Lancaster, Ohio; Cambridge, Ontario Canada; Esbjerg, Denmark; and Paruzzaro, Italy.[4]

B&W relocated its corporate headquarters from Barberton, Ohio to Akron, Ohio on December 30, 2019.

Babcock & Wilcox (B&W) is based in Akron, Ohio and provides engineering, design, construction and manufacturing services to the fossil and renewable power generation sectors and to heavy industry worldwide. B&W and its subsidiaries have facilities in Ohio; Wisconsin; Arona, Italy; Beijing, China; Esbjerg, Denmark; and technology licensees around the world.[6]

Babcock & Wilcox began in 1867 with one patent.

When Stephen Wilcox first avowed that “there must be a better way” to safely generate power, he and George Babcock responded with the design for the first inherently safe water-tube boiler.

The boilers more safely generated higher pressure steam and was more efficient (as an energy to steam converter) than existing designs.[7]

The old company logo was changed.

The B&W mPower reactor design is a 125 megawatt, passively safe Advanced Light Water Reactor (ALWR) (a Generation III reactor) with a below-ground containment structure.[15] The reactor is set to be manufactured in a factory, shipped by rail, then buried underground.[16][17]

The old B&W company logo, showing the world as an Aeolipile.