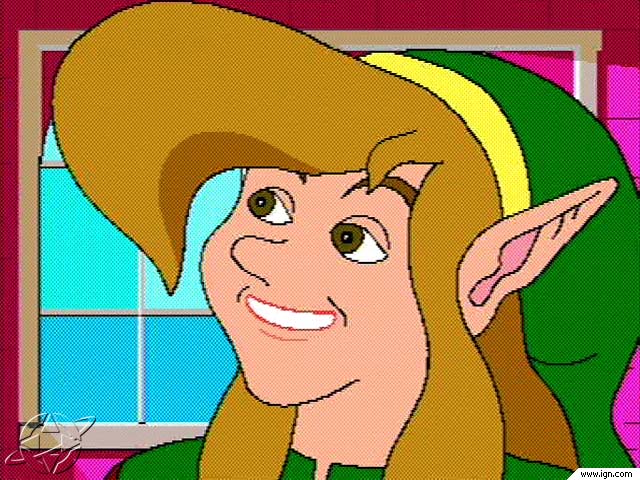 Link: The Faces of Evil is a video game developed by Animation Magic and released for the Philips CD-i in 1993.[1] It was developed in tandem with and released alongside The Wand of Gamelon.[1][2] Both titles were followed up a year later by Zelda's Adventure, which was developed separately by Viridis Corporation.

The Faces of Evil, along with the other two titles, was the product of a compromise between Nintendo and Philips following their failure to release a CD-ROM based add-on to the Super Nintendo Entertainment System.[3] They are the only licensed The Legend of Zelda games developed for and released on a non-Nintendo system.

The games have been subject to much criticism,[4] and Nintendo does not recognize them as canon to The Legend of Zelda series.[5]

The land of Hyrule is experiencing a period of peace,[6] yet Link is feeling increasingly useless and bored with no adventures to go on.

Suddenly a wizard named Gwonam arrives on his flying carpet, informing King Harkinian that Ganon's army have taken over the island of Koridai. Ganon and his minions have begun enslaving the islanders and transforming them into monsters.[7] Although the King readily volunteers their aid, Gwonam explains that according to a written prophecy, Link is the only one who can defeat Ganon.[8] As Link and Gwonam fly back to Koridai, the wizard tells him about the island's "Faces of Evil"; giant mountains and stone structures that are in the shape of Ganon's minions and are being controlled by them.[9] Gwonam beseeches that Link must conquer each Face of Evil before facing Ganon himself, who has his own Face of Evil.

Link adventures through Koridai and along the way meets several islanders who have evaded capture. At Firestone Lake, Link and Gwonam realize that Princess Zelda was captured by Ganon and put under a sleeping spell since Link left the castle.[10][11] As Link journeys to rescue Zelda and the islanders of Koridai, he confronts and defeats the masters of the Faces of Evil: Goronu, Harlequin, Militron, Glutko, and Lupay.

He also retrieves the Book of Koridai after defeating Glutko which he brings to the reader Aypo in Nortinka. Aypo translates its verses and reveals that Ganon can only be defeated with the Book. Link also later finds Gwonam's residence at the Hermit Flat and is given the Lantern of Vision to help him see the Sancromies that swarm Ganon's Lair.

After all other obstacles have been cleared, Link finally journeys to Ganon's Lair where he confronts the villain deep within his Face of Evil.

Link defeats Ganon by throwing the Book of Koridai at him, which magically imprisons him inside its pages. Ganon drops the key to Zelda's prison chamber, where Link finds and wakes her up by ringing a gong. Gwonam then teleports inside to take the pair back to Hyrule. He announces that peace is restored to Koridai and proclaims Link as their hero.[12][13]

The Faces of Evil differs from most conventional The Legend of Zelda games as it is a platformer with a side-scrolling view, similar to The Adventure of Link.

Stages are accessed from a world map, with more becoming available as Link clears an area or defeats a boss. Stages typically consist of several sections, usually with multiple enemies and traps in each section. If Link loses all of his Life Hearts and perishes, a Continue screen with a counter will display, allowing Link to restart at the area's entrance so long as he has enough continues.

Link: The Faces of Evil – Walkthrough

If however he dies three times, Link will be sent back to the world map and be forced to start over. Each stage has two Triforce Maps that serve as exits; one at the beginning and one at the end which clears the stage. In addition to simply reaching the second Triforce Map in each stage, some stages also have special items and power-ups in them that are necessary to progress through certain stages. Link also encounters several characters who provide him with essential equipment and information, often requiring a specific item in return that is found somewhere else.

Link also collects Rubies from defeated enemies, which are used to buy extra equipment from Morshu's shop in the Goronu area. Some items in the game also require Rubies to use and will consume a certain amount each time they are used.

Interactions with characters are achieved through the use of full motion video cutscenes, which play whenever Link approaches a character and touches them with his sword.

The game explains this oddity by calling Link's sword the "Smart Sword", a sword that cannot hurt friendly characters and instead encourages them to talk.[14] The cutscenes use voice acting to provide Link with instructions and story.

The Faces of Evil and The Wand of Gamelon, and later Zelda's Adventure, were the result of a compromise between Nintendo and Philips.

After their attempt to produce to CD-ROM based add-on for the Super Nintendo Entertainment System fell through, Nintendo reached a compromise and gave Philips the license to five of their franchises' characters for use with the Philips CD-i.[15][16]The Faces of Evil and The Wand of Gamelon were both developed by Animation Magic.[1] The developers chose to make two separate games featuring Link and Zelda.

Due to their small development budget and time restraints, the developers resolved to combine their funding to produce a single game engine that would be used by both games.[2] The development team consisted of four programmers, one audio engineer and composer, four artists, a producer, and a freelance writer who would help to design both games.[17] As Philips were expecting full motion video animation, the games' cutscenes were outsourced to a new animation company in St.

Petersburg, Russia, founded by games' creator Dale DeSharone and Igor Razboff.[18][19] Animators were flown over to work on the game cutscenes.[20]

Almost no supervision and input were given by Nintendo during the development of the games, who were mostly concerned with the designs and sketches of Link and Zelda.[21][22] Philips also gave very little input, however games' creator Dale DeSharone expressed in an interview that he believed that Philips would not have approved of a top-down view for the games.[23][24] The lack of input from both companies gave the developers more room for creative development.

Link: The Faces of Evil and Zelda: The Wand of Gamelon

The three Zelda CD-i games, particularly The Faces of Evil and The Wand of Gamelon, were subject to much criticism from reviewers and series fans alike.[25] The games sold poorly and suffered from critical reception,[26] with key complaints regarding the confusing and unresponsive controls, dull and repetitive gameplay, and poor animation and voice acting used in the game's cutscenes.[4][25]

This game, along with The Wand of Gamelon, were frequently used to create "YouTube Poop" remix videos, which added to their reputation among series fans.[27]

The development budgets were not high. As I recall they were perhaps around $600,000 each. We made a pitch that we could maximize the quality of the games by combining the funding to develop only one game engine that would be used by both games." —Dale DeSharone (An interview with the creator of the Zelda CD-i games - Zelda Universe)

I can understand that people were disappointed, I think probably in terms of… I guess they made comments about animation, but also in terms of gameplay and design." —Dale DeSharone (An interview with the creator of the CD-i Zelda games - Zelda Universe)

The gentle islanders are being transformed into blood-thirty warriors." (The Faces of Evil manual, pg. 2)

Zelda Is Missing! Rumors are circulating that while you have been traveling to Koridai, Zelda has disappeared from the Palace! Could it be that Ganon has used his magical powers to kidnap her? You'd better get to work. 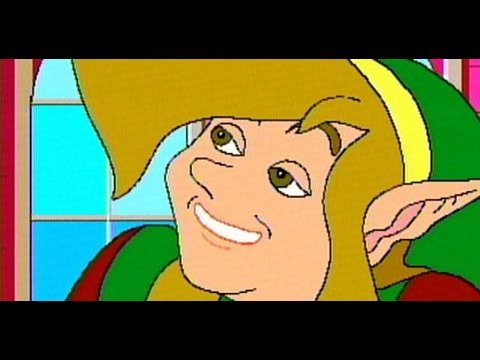 Find Ganon, rescue Zelda and become the hero of Koridai!" (The Faces of Evil manual, pg. 9)

I shall keep her in my prison!" — Ganon (The Faces of Evil)

The birds are singing! Isn't it beautiful?" — Gwonam (The Faces of Evil)

of the Netherlands has reached an agreement for Nintendo to provide its games for Philips's new interactive compact disk player, which lets users manipulate characters on a television screen. The arrangement is expected to give the Philips machine an edge over competing products." — Eben Shapiro, Nintendo Goal: Bigger-Game Hunters, NYTimes.com, published June 1, 1991, retrieved April 5, 2015.

Link: The Faces of Evil

I think AIM chose to go with the biggest names that Nintendo had at the time." —Dale DeSharone (An interview with the creator of the Zelda CD-i games - Zelda Universe)

We had a single freelance writer who wrote the scripts and helped design both games." —Dale DeSharone (An interview with the creator of the Zelda CD-i games - Zelda Universe)

A mutual friend put me in touch with Igor Razboff. Igor was also interested in starting a new technical company at this time (1991)." —Dale DeSharone (An interview with the creator of the Zelda CD-i games - Zelda Universe)

U.S. animators have been paid fair amounts of money, for decades, to learn animation. And they were more scattered over there, in smaller studios. But we had about half a dozen people, and we brought them over here to the U.S. for 6 months, and put them up in an apartment, there are a couple of apartments near where I live, here in Massachusetts." —Dale DeSharone (An interview with the creator of the Zelda CD-i games - Zelda Universe)

They were mostly interested in the look of the Link and Zelda characters.

I think the Link and Zelda characters were in somewhat of a formation stage back then. Because really, the characters didn’t appear very detailed in the Nintendo game. They were mainly visible, you know, on the box covers." —Dale DeSharone (An interview with the creator of the Zelda CD-i games - Zelda Universe)

Otherwise there wasn’t anything that came from Nintendo." —Dale DeSharone (An interview with the creator of the Zelda CD-i games - Zelda Universe)

And that was what they were most concerned with.

Does the CD-i game look visually different from other game or computer systems, and are we making less use of the graphics? The possibility that the top down might have been more fun for gameplay, wouldn’t have affected them. So we definitely pushed for the side view." —Dale DeSharone (An interview with the creator of the Zelda CD-i games - Zelda Universe)

The animation is fluid, but freakishly so. The characters will often pantomime what they're saying for some bizarre reason, and facial expressions are often exaggerated to an unintentionally hilarious degree.