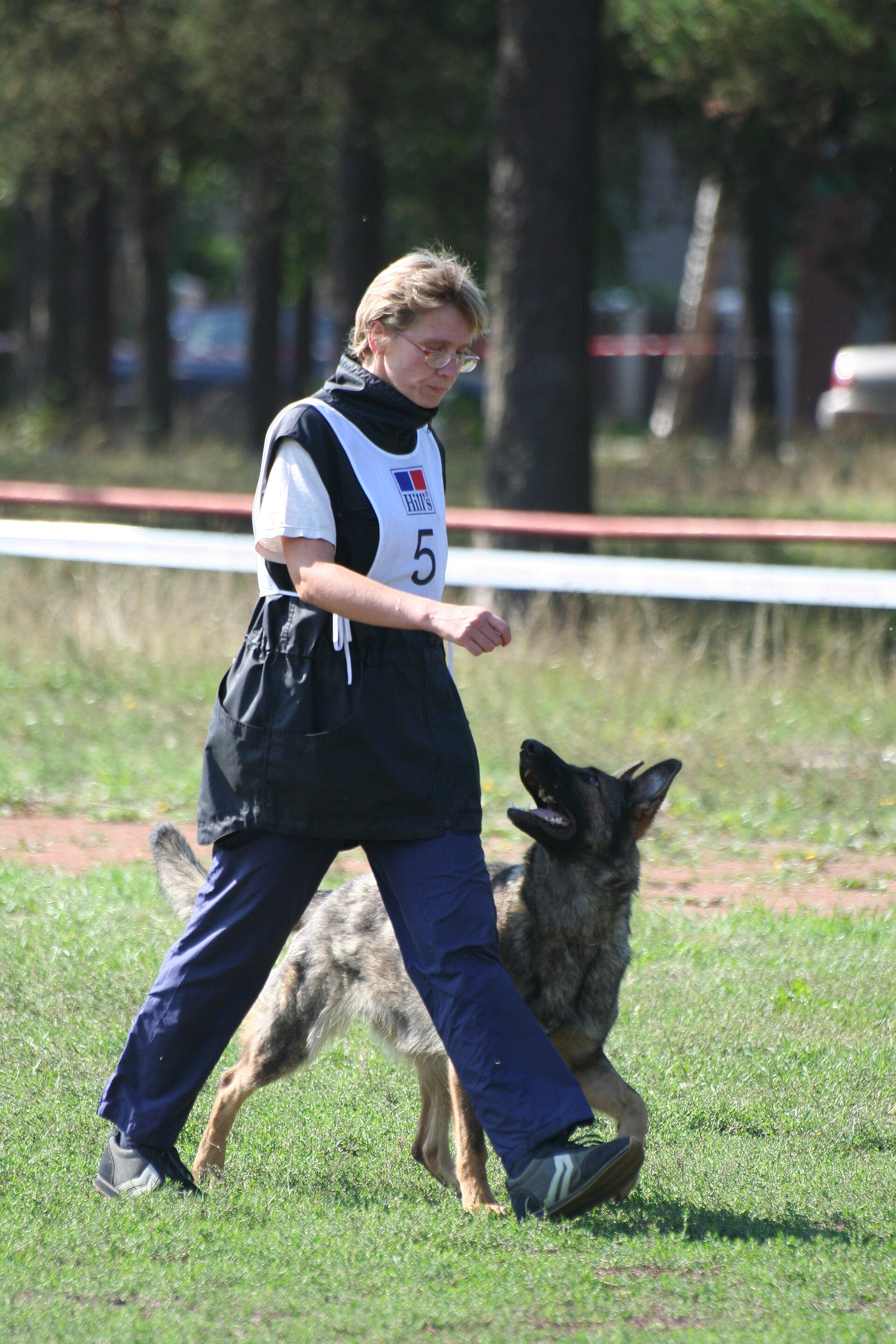 Schutzhund is a German word meaning “protection dog”. It refers to a sport that focuses on developing and evaluating those traits in dogs that make them more useful and happier companions to their owners.

Schutzhund work concentrates on three parts. Many are familiar with the obedience work of the American Kennel Club’s affiliates and will recognize the first two parts, tracking and obedience.

The Schutzhund standards for the third part, protection work, are similar to those for dogs in police work.

While dogs of other breeds are also actively involved in the sport of Schutzhund and often follow similar criteria for breeding purposes, this breed evaluation test was developed specifically for the German Shepherd Dog.

Schutzhund is intended to demonstrate the dog’s intelligence and utility.

This working dog sport offers an opportunity for dog owners to train their dog and compete with each other for recognition of both the handler’s ability to train and the dog’s ability to perform as required.

It is a sport enjoyed by persons of varied professions, who join together in a camaraderie born of their common interest in working with their dogs. Persons of all ages and conditions of life even those with significant disabilities enjoy Schutzhund as a sport. Often, it is a family sport that becomes a lifestyle.

The first Schutzhund trial (now referred to as “IPO”) was held in Germany in 1901 to emphasize the correct working temperament and ability in the German Shepherd breed.

Originally, these dogs were herding dogs, but the industrialization of Germany encouraged breeders to promote the use of their dogs as police and military dogs.

The Verein fur Deutsche Schaferhunde (SV), the parent club, became concerned that this would lead to careless breeding and undesirable traits such as mental instability, so it developed the Schutzhund test. Since then, many other countries and working dog organizations have also adopted Schutzhund as a sport and a test of working performance in dogs.

International rules have been established, and they are administered by the Verein fur Deutsche Hundesport (VDH).

The IPO titles are comprised of 3 phases.

In each phase, the presiding judge observes and assesses the dog for sound working temperament, as defined in the USCA rules for working dog trials.

The tracking phase includes a temperament test by the overseeing judge to assure the dog’s mental soundness.

When approached closely on a loose leash, the dog should not act shyly or aggressively.

At the end of a 33 foot leash, the handler follows the dog, which is expected to scent the track and indicate the location of the objects, usually by lying down with it between its front paws. The tracking phase is intended to test the dog’s trainability and ability to scent, as well as its mental and physical endurance.

The obedience phase includes a series of heeling exercises, some of which are closely in and around a group of people. 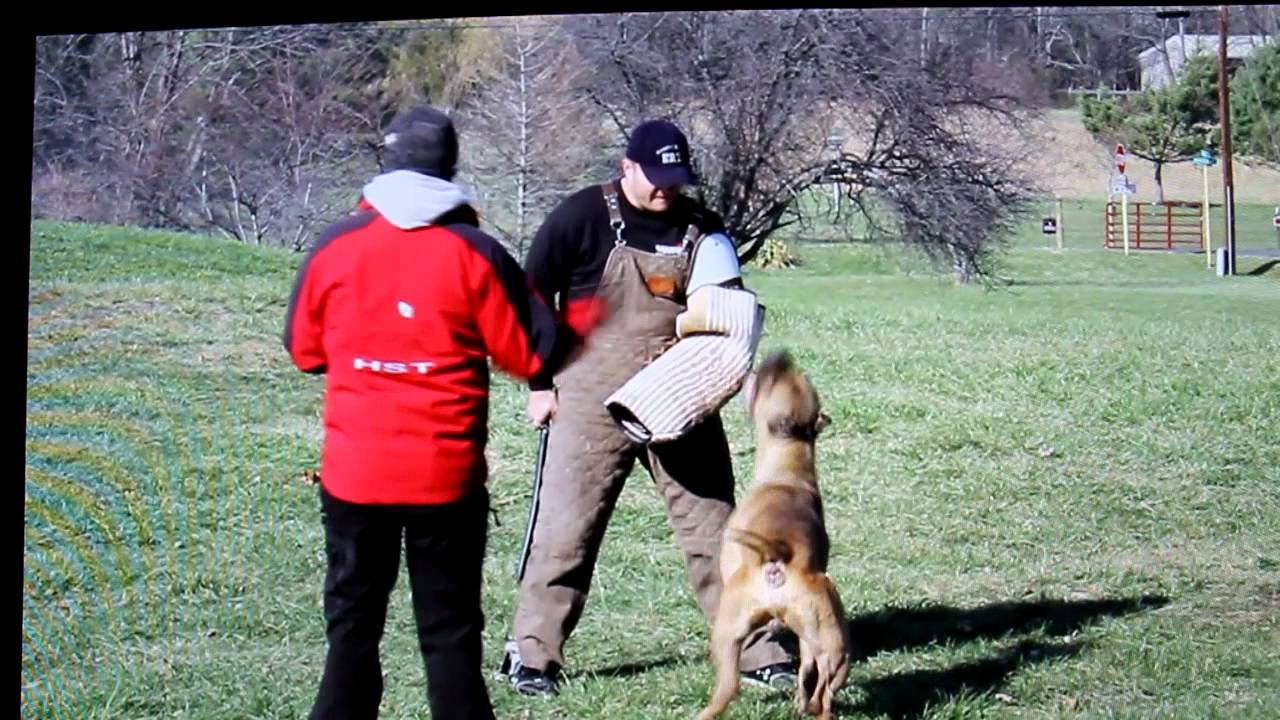 During the heeling, there is a gun shot test to assure that the dog does not openly react to such sharp noises. There is also a series of field exercises in which the dog is commanded to sit, lie down, and stand while the handler continues to move. From these various positions, the dog is recalled to the handler.

With dumbbells of various weights, the dog is required to retrieve on a flat surface, over a one-meter hurdle, and over a six-foot slanted wall.

The dog is also asked to run in a straight direction from its handler on command and lie down on a second command.

Finally, each dog is expected to stay in a lying down position away from its handler, despite distractions, at the other end of the obedience field, while another dog completes the above exercises. All of the obedience exercises are tests of the dog’s temperament, structural efficiencies, and, very importantly, its willingness to serve its owner.

The handler’s control of the dog is absolutely essential. The exercises include a search of hiding places, finding a hidden person (acting as a decoy), and guarding that decoy while the handler approaches.

The final test of courage occurs when the decoy is asked to come out of a hiding place by the dog’s handler from the opposite end of the trial field.

The dog is sent after the decoy who is threatening the dog with a stick and charging at the handler. All grips during the protection phase are expected to be firmly placed on the padded sleeve and stopped on command and/or when the decoy discontinues the fight.

What is Schutzhund & IPO?

The protection tests are intended to assure that the dog possesses the proper temperament for breeding.

At Grothaus, we believe that the temperament, obedience, tracking, and protection tests in the IPO trial process provide real, documented evidence of a dog’s worthiness to be bred.

These trials demonstrate the dog’s intelligence and utility, and measure the dog’s mental stability, trainability, and courage. Regrettably, these important tests are absent from the AKC’s champion titles, and absent from many other breeder’s breeding standards.

The BH or companion dog title is a pre-requirement for IPO titles.

All breeds and sizes are eligible with the minimum age requirements of 15 months.

In addition to the IPO titles listed above, the United Schutzhund Clubs of America offers several other training degrees: the STPr, FH 1, FH 2, and IPO-FH tracking degrees; the AD which is an 12.5 mile endurance test (one of the requirements for the Breed Survey); separate obedience, protection and tracking titles that reflect the routines for IPO 1, 2, & 3 levels; and RH titles.

For IPO1 the dog must be at least 18 months old, pass an initial temperament test by the judge and must already have earned its BH.

The dog must heel off leash, demonstrate the walking sit, the walking down, and the long down under distraction, as well as the send-out.

It must retrieve on the flat and over a hurdle, and over the scaling wall. In tracking, it must be able to follow a track laid by its handler at least 20 minutes earlier. 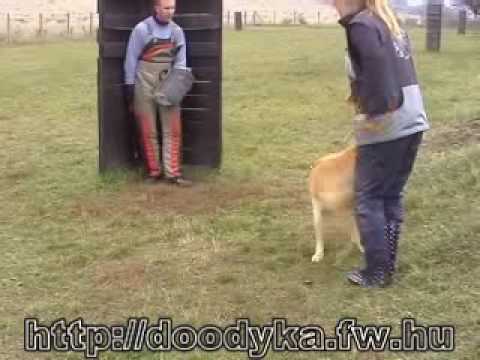 In the protection phase, the dog must search 2 blinds, perform escape and courage test exercises, and demonstrate a side transport.

For IPO2 the dog must be at least 19 months old and must already have earned its IPO1 degree. It must again pass all of the obedience and protection tests required for the IPO1 degree, but those tests, for IPO2, are made more difficult and require greater endurance, agility, and, above all, control.

There is an additional walking stand exercise required. In tracking, the IPO2 candidate must be able to follow a track laid by a stranger at least 30 minutes earlier.

In protection, the dog must search 4 blinds and demonstrate a back transport of the decoy in addition to the IPO exercises.

For IPO3, the master’s degree, the dog must be at least 20 months old and must have earned both the IPO1 and the IPO2 titles. Again, the tests now are made far more difficult.

All exercises in obedience and protection are demonstrated off leash. The Walking stand is replaced by the running stand. In tracking, the dog must follow a track that was laid by a stranger at least 60 minutes earlier. The track has four turns, compared with two turns for IPO1 and 2, and there are three objects, rather than two, that must be found by the dog.

In protection, the dog must search 6 blinds and demonstrate a back transport of the decoy in addition to the IPO exercises. The picture of obedience, strength, eagerness, and confidence presented by an excellent IPO3 team is a beautiful illustration of the partnership of human and dog.