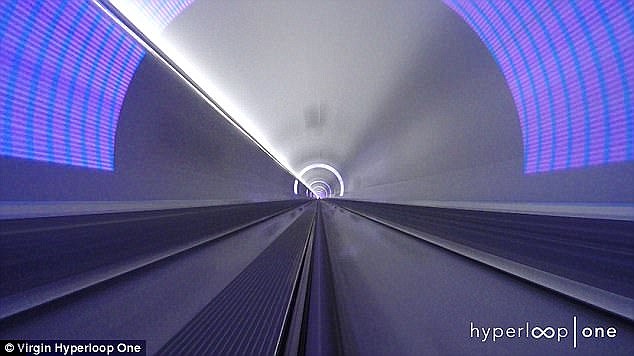 Not to be confused with Hyperloop Transportation Technologies.

Virgin Hyperloop One (formerly Hyperloop Technologies and Hyperloop One) is an Americantransportation technology company that works to commercialize the high-speed technology concept called Hyperloop. The company was established on June 1, 2014 and reorganized and renamed on October 12, 2017.[3] Hyperloop systems are intended to move passengers and/or cargo at airline speeds at a fraction of the cost of air travel.

The concept of Hyperloop transportation was first introduced by Elon Musk on August 12, 2013.[4] The planned route runs from Los Angeles, California to Las Vegas, Nevada.

The original Hyperloop concept is proposed to use a linear electric motor to accelerate and decelerate an electromagnetically levitated pod through a low-pressure tube. The vehicle would glide silently for miles at speeds up to 760 mph (1223.1 km/h) with very low turbulence[5] The system is proposed to be entirely autonomous, quiet, direct-to-destination and on-demand.

Additionally, as Hyperloop is proposed to be built on columns or tunneled underground, this could eliminate the dangers of at-grade crossings and require smaller rights of way than high-speed rail or a highway.[6] Virgin Hyperloop One has made substantive technical changes to Musk's initial proposal and chose not to pursue the Los Angeles–to–San Francisco notional route that Musk envisioned in his 2013 alpha-design white paper.

The test combined Hyperloop components including vacuum, propulsion, levitation, sled, control systems, tube and structures.[10] As of May 2019, the company had raised $400 million.[11]

Its publicly stated goal is to provide a fully operational Hyperloop system by 2020 or 2021.[12]

The idea for Hyperloop One emerged from a conversation between Elon Musk and Iranian American Silicon Valley investor Shervin Pishevar when they were flying together to Cuba on a humanitarian mission in January 2012.

Pishevar asked Musk to elaborate on his Hyperloop idea, which the industrialist had been mulling over for some time. Pishevar suggested using it for cargo, an idea Musk hadn’t considered, but he did say he was considering open-sourcing the concept because he was too busy running SpaceX and Tesla. Pishevar pushed Musk to publish his ideas about the Hyperloop, so that Pishevar could study them.[13]

In the months that followed Pishevar incorporated Hyperloop Technologies, which would later be renamed Hyperloop One, and recruited the first board members, including David O.

By January 2015, Hyperloop Tech had raised $9 million in venture capital from Pishevar's Sherpa Capital and investors such as Formation 8 and Zhen Fund, and was able to move into its current campus in the Los Angeles Arts District. Forbes magazine put Hyperloop Tech on its February 2015 cover, landing the startup lots of fresh recruits and new investor interest.

Between June 2015 and December 2015, the company continued to hire engineers and expand its downtown campus (now up to 75,000 square feet). In December 2015, the renamed Hyperloop One announced it would hold an open-air propulsion test at a new Test and Safety Site in Nevada.

At the time, the company disclosed it had raised $37 million in financing to date and was completing a Series B round of $80m,[17] which they closed on in May 2016.[18] In October 2016, Hyperloop One announced that it had raised another $50 million, led by an investment from DP World.[19]

The propulsion open-air test or POAT, was successfully held in North Las Vegas on May 11, 2016.

The POAT sled accelerated to 134 mph (216 km/h) in 2.3 seconds, representing a crucial proof of concept.[20] At the time Hyperloop One announced it had secured partnerships with global engineering and design firms such as AECOM, SYSTRA, Arup, Deutsche Bahn, General Electric, and Bjarke Ingels.[18]

On November 10, 2016, Hyperloop One released its first system designs in collaboration with the Bjarke Ingels Group.[23]

On July 12, 2017, the company revealed images of its first generation pod prototype to be used at the DevLoop test site in Nevada to test aerodynamics.[24] On August 2, 2017, Hyperloop One successfully tested its XP-1 passenger pod, reaching speeds of up to 192 mph (309 km/h).

On July 19, 2018, an Ohio regional planning commission was investigating concepts of using Hyperloop between airports and potentially between regional cities such as Chicago, Columbus and Pittsburgh.[27]

After Hyperloop One began the construction of 500-metre (1,600 ft) DevLoop in October 2016, the company successfully conducted the first full-system test using the levitating chassis without passenger pod on May 12, 2017.

The next phase of the test would involve a passenger pod.[30] The company designed and built its first generation passenger pod name XP-1 (short for experimental pod one) to be used in the full-scale pod tests.[31][32]

The pod's motor was evolved from 500 motors that were built and tested in order to operate with resiliency in near-vacuum environment.[25] The pod was successfully tested for the first time on July 29, 2017 with the 300 metres (980 ft) of acceleration to reach the recorded speeds of 310 kilometres per hour (190 mph). The pod achieved 3,151 horsepower during the test inside the depressurized tube with conditions similar to the atmosphere at 200,000 feet (61 km) above sea level.[31]

The XP-1 speed record was broken in August 2017 by WARR Hyperloop during the second Hyperloop Pod Competition with the top speeds of 324 kilometres per hour (201 mph).[33] However, the pods in the competition were small and would not be large enough to carry passengers.[34] XP-1 set the world's speed record again during the test in December 2017 that reached 387 kilometres per hour (240 mph).

With that test, the company also demonstrated its airlock technology that allowed the pod to be transferred into the depressurized tube.[35] With this system, XP-1 pod can be put in an airlock which takes a few minutes to depressurize before entering the already depressurized tube. Otherwise, the pod would need to enter the tube and wait for the 4-hour depressurization of the entire test tube.[36] In 2018, WARR Hyperloop broke XP-1 record again in the third Hyperloop Pod Competition.[34]

On October 16, 2018, the Financial Times reported that Saudi Arabia walked away from a planned US$1 billion investment in Hyperloop and other Virgin companies.[41]

The CEO of Hyperloop One is Jay Walder, former CEO of Motivate.[42] The co-founder and President of Engineering is Josh Giegel.

As of July 2018[update], the board of directors include Richard Branson (Chairman), Justin Fishner-Wolfson, Sultan Ahmed Bin Sulayem, Rob Lloyd, Josh Giegel, Bill Shor, Yuvraj Narayan, Anatoly Braverman, and Emily White as a strategic adviser.[43] Former board members include Peter Diamandis, Jim Messina who as of July 2018[43] serves as strategic adviser, former Morgan Stanley executive Jim Rosenthal, Joe Lonsdale, the co-founder Shervin Pishevar,[44] who took a leave of absence from Hyperloop One in December 2017 after multiple women accused him of sexual misconduct,[45][46][47][48] and Ziyavudin Magomedov, a Russian billionaire who was arrested on embezzlement charges in 2018.[49]

On November 8, 2018, Richard Branson was replaced as chairman by Sultan Ahmed bin Sulayem.[50]

In June 2016 the company announced a memorandum of understanding with the Summa Group and the Russian Government to construct a Hyperloop in Moscow and has since completed two feasibility studies – one in Moscow and one in the Far East.[51]

In August 2016, Hyperloop One announced a deal with the world's third largest ports operator, DP World, to develop a cargo offloader system at DP World's flagship port of Jebel Ali in Dubai.[52]

On November 8, 2016, Hyperloop One announced it had signed a deal with Dubai’s Roads and Transport Authority (RTA) to conduct a number of feasibility studies on potential passenger and cargo Hyperloop routes in the United Arab Emirates.[23]

By April 2017, Hyperloop One had feasibility studies underway in the United Arab Emirates, Finland and Sweden, the Netherlands, Switzerland, Moscow, and the UK.[53]

On September 1, 2017, Hyperloop signed a letter of intent with Estonia to cooperate on the Helsinki to Tallinn Tunnel.[54]

In February 2018, the Virgin Group signed an "intent agreement" with the government of the Maharashtra state of India to build a hyperloop transportation system between Mumbai and Pune.[55]

In June 2019, Hyperloop One announced an ongoing collaboration with the Sam Fox School of Washington University in St.

Louis to explore proposals for the Missouri Hyperloop.[56][57]

The Hyperloop One Global Challenge was judged by an international panel of consisting of five judges: Peter Diamandis, Bassam Mansour, Ulla Tapaninen, Clive Burrows, and Alan Berger.[63] The countries with teams that won include the US, UK, Canada, Mexico, and India. The winners were to be invited to work closely with Hyperloop One on viability studies to try and bring their respective loops from proposal to reality.[64]

The ten winning routes that were selected are:[65]

In July 2016, the CTO and co-founder Brogan BamBrogan left the company,[66] later filing a lawsuit with three other former employees alleging breach of fiduciary duty and misuse of corporate resources.[67] On July 19, 2016, Hyperloop One filed a countersuit against the four former employees, alleging they staged a failed coup of the company, in the process breaching agreements around fiduciary duty, non-competes, proprietary information and non-disparagement, as well as intentional interference with contractual relations.[68] On November 18, 2016, both parties agreed to settle the lawsuit.

Terms were confidential and not disclosed.[69] BamBrogan and other former Hyperloop One and SpaceX employees went on to found Arrivo, a now defunct hyperloop company.[70]

J. "On the Aerodynamic Design of the Hyperloop Concept"(PDF). web.mit.edu.

"Hyperloop Technologies is trying to make Elon Musk's dream a reality". The Verge. US. Archived from the original on December 10, 2015. Retrieved October 25, 2015.

Virgin Hyperloop One: Full Speed Ahead

Can you trade forex on your phone

"Austin to Dallas in 17 minutes? Virgin Hyperloop brings back the hype". invest in companies before IPO