WeWork’s initial public offering won’t be quite the celebration the office-rental unicorn once foresaw.

The New York-based startup is considering seeking a valuation of about $20 billion to $30 billion in the IPO, people with knowledge of the matter said.

The range could end up closer to $20 billion, said one of the people, which would be less than half the valuation it secured from its biggest backer just a few months ago.

The outlook for the public debut of WeWork, which has racked up billions of dollars in losses in recent years as the company funds grand ambitions, is cooling after the disappointments of other major IPOs this year such as Lyft Inc.

That could put pressure on WeWork, which has a mammoth credit line tied to the success of the IPO, as well as SoftBank Group Corp., which invested at a $47-billion valuation earlier this year.

“They would probably price this thing at the more conservative end, maybe in the $20-billion range, given that the company is trying to raise more money,” Phil Haslett, co-founder of EquityZen, a marketplace for private stock sales, said on Bloomberg Television.

Potential terms for the share sale are still being discussed, and the eventual valuation could change depending on investor demand, said the people, asking not to be identified because the information is private.

A representative for WeWork, whose parent is the We Co., declined to comment.

WeWork Chief Executive Adam Neumann met with SoftBank CEO Masayoshi Son in Tokyo last week to discuss a potential capital infusion, the Wall Street Journal reported, citing unidentified people familiar with the matter. The possibility of SoftBank investing money to enable WeWork to delay the IPO until 2020 was also raised in the discussions, the paper said.

SoftBank and its affiliates own about 29% of WeWork ahead of its initial public offering, an executive for the co-working company said in a private meeting with analysts this week.

The sizable stake, which hasn’t been disclosed publicly, indicates that the Japanese conglomerate’s fortunes are tied up in a big way with the performance of WeWork.

Neumann has a stake of about 22%, which will rise to 29% over time after his stock vests, the executive said in the meeting, according to a person with direct knowledge of the matter.

While the IPO prospectus includes some information about the sizes of various shareholders’ stakes, it didn’t specify percentages.

The documents did say, however, that Neumann wouldn’t sell stock for at least a year after the IPO.

WeWork is planning to kick off its IPO roadshow as soon as next week. The company is targeting a share sale of about $3.5 billion, a person familiar with the matter said in July.

That would be the second-biggest IPO this year behind Uber, another loss-making startup funded by SoftBank.

WeWork plans to take out a $2-billion letter-of-credit facility and a $4-billion delayed-draw term loan from several banks concurrent with the IPO.

Lenders will have to make good on their commitments only if at least $3 billion is raised in the equity offering, according to a filing.

Neumann told analysts at the private meeting that he was particularly pleased Wells Fargo & Co. had participated in the credit facility.

“If Wells Fargo, the largest lender in this country, can get comfortable with this, then everybody should,” Neumann said, according to a person with direct knowledge of the matter.

“The reason I’m proud of your team is you guys are not usually debt-equity story people,” Neumann told the Wells Fargo analysts who attended the session, according to the person, who asked not to be identified discussing a private meeting.

“I met the decision makers in your firm and they couldn’t care less about the equity story. They only cared about one thing — are the buildings profitable and are we getting paid back,” Neumann said.

“I’m not even sure you guys have a CEO at the moment, so it’s not easy,” he joked.

Wells Fargo is more than five months into a search for a new chief executive. 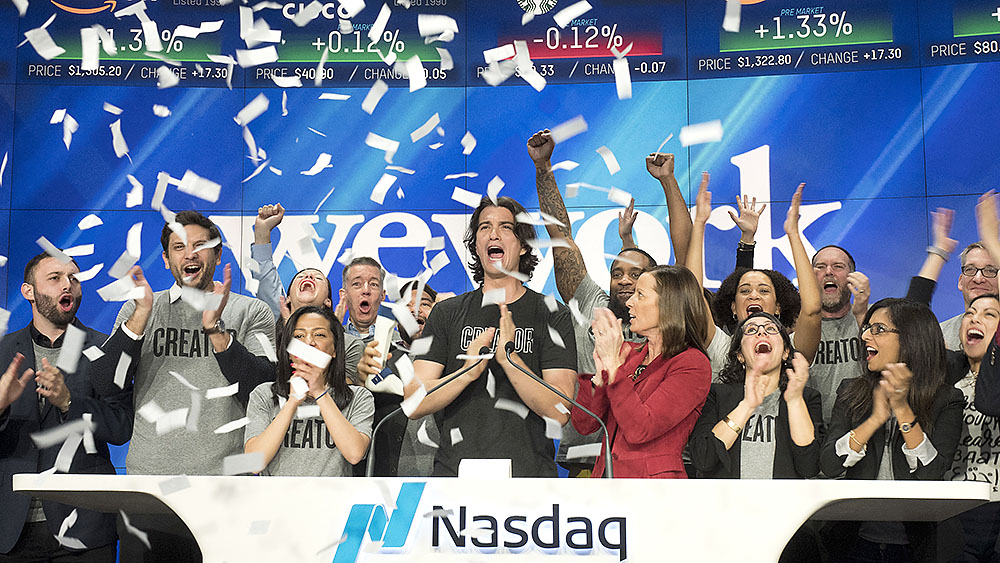 Its previous leader, Tim Sloan, stepped down in March, and former general counsel Allen Parker has been running the bank in the interim.

WeWork’s IPO plans filed last month were greeted by sometimes blistering criticism for the way it obscured key details about the economics of the business. The New York-based startup headed by Neumann leases and owns spaces in office buildings, which it decorates and then rents out to companies ranging from tiny startups to large corporations.

It has raised more than $12 billion since its founding nine years ago but has never turned a profit.

Neumann, a co-founder and polarizing figure, has also courted controversy. Tangled business relationships involving Neumann and his family show an interdependence that runs deeper than most entrepreneurs to their creations and one that raises concerns among prospective shareholders.

In particular, Neumann owns several commercial properties that he leased to WeWork, and he has sold significant amounts of his equity ahead of the public stock offering.

WeWork’s initial IPO plans revealed the company had paid Neumann $5.9 million for the trademark rights to the name “We Company,” which he held.

After coming in for criticism, Neumann repaid that money to the company.

According to the IPO filings, WeWork lost $2.9 billion in the last three years and $690 million in just the first six months of 2019.

Its annual revenue, though, had more than doubled to $1.8 billion in 2018, compared with $886 million the previous year.

With assistance from Nabila Ahmed and Ellen Huet.